It’s impossible to understand the history of our downtown Gatlinburg hotel, Bearskin Lodge, without first understanding the story of Hattie Ogle McGiffin. Hattie was born on February 24, 1898. At this time, Gatlinburg was a sleepy logging community nestled in the foothills of Southern Appalachia; however, rural life was tough as the town did not have municipal utilities such as running water, electricity, telephone, or a sewer system. Despite the odds, the residents of Gatlinburg were resilient and understood the value of hard work. In 1912, at the age of 14, Hattie began working for her father at his general store selling everything from farm tools and toys to flour and butter. Despite the wide variety in products, Hattie became particularly skilled at one specific component of the business – negotiating with hunters on animal skins. Due to the indigenous wildlife, one of the most prevalent skins she dealt with were bearskins. Five years later, Hattie found love when she married Charles “Charlie” Austin Ogle, whose family owned the other general store in town. The business and family began to grow as Charlie and Hattie had four children, all of whom were active in the family business. In 1932, she opened her first independent business venture, The Bearskin Craft Shop. The Bearskin Craft Shop was the first craft shop in Gatlinburg not affiliated with the Pi Beta Phi Fraternity and was located where The Ogle Building sits today on the Parkway in downtown Gatlinburg. Overnight lodging began to emerge as Gatlinburg slowly earned the reputation as a charming, mountain resort community in the 1920s. Rumors began to swirl from Knoxville about the possibility of forming a new national park that would potentially be located near Gatlinburg. Hattie foresaw the potential and impact this would have on Gatlinburg as a tourism market, as well as the demand that could be generated for overnight accommodations by guests visiting the national park. So, after a few successful ventures in retail, Hattie decided to dip her toes into the hospitality industry in the early 1940s. Her mission was to create a warm, authentic, welcoming atmosphere with exceptional service. Starting small, she built several intimate cottages on family-owned land that was being used as a cow pasture. Over time, she grew the property to consist of the original house and seven cottages which she named The Bearskin Tourist Home. As popularity grew and demand outpaced supply, Hattie tore down the original house and built a 15-room motel – The Bearskin Motel. The warm, plush rooms consisted of cozy fireplaces, locally sourced stone, and custom-made interior woodwork made of wormy chestnut. One of the most unique characteristics of the motel was the pool which was created in the shape of a bearskin. Hattie’s philosophy was simple – provide first class accommodations with exceptional service at a fair price. 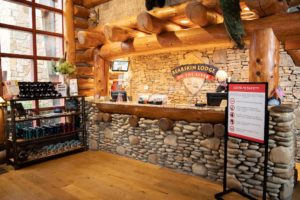 The Bearskin Motel experienced many successful years of entertaining and serving its valued guests. Gatlinburg’s economy continued to expand as more accommodations, attractions, and retail began to line the Parkway in downtown Gatlinburg. Hattie increased her lodging footprint by building the Roaring Fork Motel and the Dudley Creek RV Park. Due to the rapid growth and increased tourism, parking became scarce. Hattie ultimately believed the greatest and most valuable use of the property was to create parking; therefore, The Bearskin Motel was demolished in the late 1980s. In her truest entrepreneurial and pioneer spirit, one of the last projects of her life was building The Bearskin Parking Garage which was one of the first parking garages built in the city of Gatlinburg. The Bearskin Parking Garage still stands today next to TGI Friday’s in downtown Gatlinburg. Hattie passed away on June 21, 2002 at the age of 104. Today, Hattie Ogle McGiffin’s family is still active in the lodging industry in the Smokies. On November 18, 1997, the Ogle family purchased the 1.4-acre property along the banks of the Little Pigeon River with visions of building a flagship property. It was the intent of the Ogle family to recreate that pioneer hospitality first demonstrated by Hattie Ogle McGiffin at The Bearskin Motel.  After a few years of planning, design, permitting, and construction, the multi-million-dollar Bearskin Lodge, a beautiful downtown Gatlinburg hotel, opened its doors for business in 2000. Bearskin Lodge would soon become a guest favorite, hosting people from across the United States with cozy, mountainous rooms, rustic furniture, balconies overlooking the river, and yes, a bearskin rug displayed in the lobby just like its predecessor had used many years ago.  Like before, the family who owns this incredible downtown Gatlinburg hotel holds the same values and mission that its matriarch possessed – To provide its cherished guests with an authentic experience celebrating the southern, rustic charm of Gatlinburg and the Smokies in a warm, welcoming environment with exceptional service.